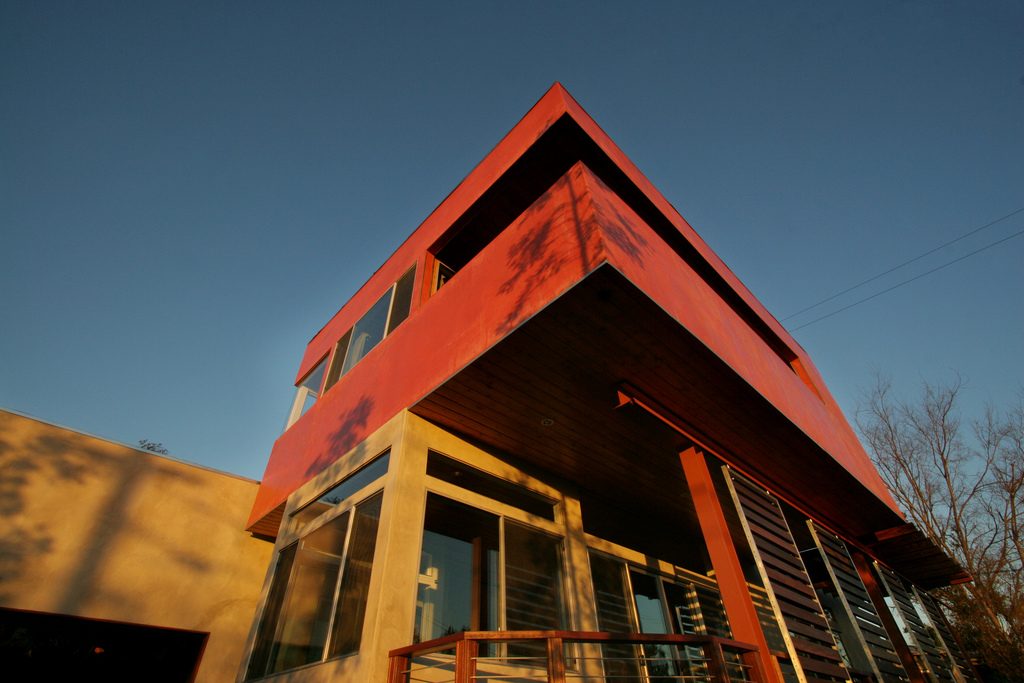 At the ProfTalks Lectures in Toronto, Lloyd Alter upended a few popular ideas about the future of buildings. The architect and professor at the Ryerson University School of Interior Design outlined his vision for sustainable living spaces. While tech companies are asking us to incorporate new technology into our thermostats and fridges as a way to monitor – and hopefully cut down on – energy consumption, Alter believes a more eco-friendly future can be found in building small, simple homes that require less energy to begin with.

Here are five things we learned from the lecture.

1. Bad urban design is as big a problem as bad buildings

Alter opened up his talk discussing the oft-cited statistic that existing buildings are responsible for more than 40 per cent of the world’s primary energy consumption. But it’s not just the structures themselves that are a cause for concern. The big problem is the post-war suburban housing boom, which gobbles up a significant amount energy with so many commuters driving miles and miles from work and home everyday. It’s estimated that 75 per cent of Americans drive to work alone.

Alter quoted author and journalist David Ownen’s maxim: “Make more places like Manhattan.” The dense island uses far less energy per capita than most places, including sprawl-heavy cities like Houston. In Canada, he pointed to Montreal’s Plateau District as something to strive for. The popular downtown neighbourhood, known for its walk-ups and mid-rise apartment buildings, has one of the highest person per hectare densities in the country. People use less energy here thanks not only to their smaller living quarters, but also because they typically bike, use public transit or walk to work. Alter isn’t championing hyper-density, but more mid-rise development along major thoroughfares, such as St. Clair Avenue in Toronto. The idea? “Happily use less,” whether it’s space, energy or fuel.

While much of the green movement has focused on making everything more  efficient, whether it’s your fridge or car or light bulb, that doesn’t always translate into bigger energy savings. Alter points out that houses built today are better than they were in post-war years thanks to better insulation, more efficient appliances and heating and cooling systems and things like LED lights. And yet, a typical home uses 50 per cent more energy than it did following WWII. Alter focused on the absurdity of LED lights: while they use up less energy and last longer than incandescent lights, that doesn’t mean we’re, overall, using less energy. At fast-food restaurants, instead of printed menus above the registers, we have flashing LED screens. In big cities, it’s also become common for advertisers hire trucks to drive around the city with ads lit up by LED lights or screens. They may be efficient, but if you use them more, you’re not exactly saving the earth.

When discussing using less space, Alter doesn’t suggest we all opt to live in a tiny micro suite. He noted that the tiny house movement is a romantic notion, and many of these wee spaces were  created as guest houses or offices. Most of the small houses we see in magazine spreads are exceptionally small homes in the middle of nowhere (which means, of course, more driving to get around).

Instead, we should focus on smaller living spaces in cities, community-oriented housing where you can walk and bike to work and use common areas like parks and rec centres instead of your own, extra private home space. Historically, people lived with less space and that’s something we should keep in mind. There’s also been a movement towards high-tech solutions in super small spaces. Though there’s been much fanfare for Graham Hill’s 420-square foot, eight-room apartment, Alter doesn’t think that that’s necessarily the best solution either, being too high-tech and high-maintenance.

In other words, so-called “smart houses” rigged up with fancy gadgets doesn’t necessarily translate to greener results. Alter believes the industry is going about it in the wrong manner. Instead of building the same, energy-leaking mega-houses and then sticking a wind mill on top, we should be putting more effort into building smaller, passive houses that use less energy to begin with, using superior insulation, windows and energy-efficient landscaping.

Alter is no Luddite: he spoke of his own home problems with “smart” appliances including a television, furnace, an LED lighting app and a computer-assisted stove top. Basically, smart tech can take something that’s supposed to be a long-term investment, like a stove that lasts for decades, and then reduce its life span considerably. A component in his computerized stove broke three years after purchase and couldn’t be replaced. Now he can’t turn on his own stove. Apps need constant updating and sometimes the technology can make poor or inappropriate decisions too. There are also concerns about data and privacy issues. For example, Samsung’s smart TV features voice-recognition technology and the company has been accused of eavesdropping, sending data to a third party.

5. “Dumb houses” and old-timey ideas should have a bigger part in the future

Alter says the smart house movement can make our living spaces needlessly complicated and perhaps even unhealthy (there have been concerns over increased Wi-Fi radiation in recent headlines). Though he saw himself as a modernist for years, Alter ended up turning to century-old designs that made sense. He pointed to a 17th century homes with shutters over the windows that help protect the house from storms but also catch cooling cross breezes. Simple, yet quite ingenious. No app needed!

He champions passive houses or “dumb houses” as he calls them. These aren’t rigged up with what he called “Silicon Valley doodads” but passively deal with their surroundings. For example, instead of installing geothermal heating and cooling system or wiring up a windmill for green energy, why not just use less energy? One method used by builder of passive houses is planting deciduous trees near windows so you have leafy shade and a cooler home in summer and more light come winter when the branches are bare. Plus superinsulation and high-quality windows means that temperature won’t fluctuate – if the power goes out in winter, the home won’t cool off so fast. The bottom line? Far less energy gets used